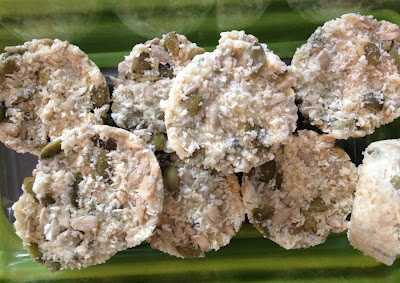 A year ago I would NEVER have made this recipe! I was eating a low fat, vegan, whole foods plant based diet—about as far away from a ketogenic, Paleo-inspired diet as you can get. The idea of eating a “fat bomb” would have made me laugh out loud, if not gag. 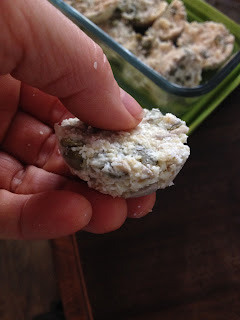 Backstory. I discovered fat bombs when scouting around online for a sweet treat that wouldn’t feed my archaea and aggravate my SIBO. The treat I was searching for needed to be grain-free, sugar-free and low in fermentable carbs.

Most of the fat bomb recipes I've come across are made with a base of coconut oil, which is fine, but I prefer to use cacao butter, which is the pure fat of the cacao bean.

Cacao butter is rock solid at room temperature but melts instantly upon contact with the human body.

It also tastes lovely, providing the aromatic essence of chocolate without any fiber or caffeine. Cacao butter is the key ingredient in so-called "white chocolate", hence the name of these adorable coconut cups. 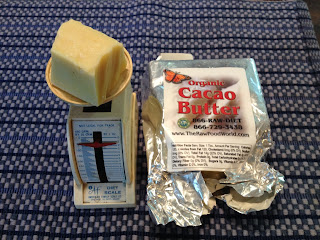 In case you're wondering where to find Raw Cacao Butter, try The Raw Food World online, a super sweet family-run business. That's where I get mine.

As you can see, I use a fancy high tech kitchen scale (pictured at left) to weigh it out. Then, I melt it in the toaster oven on the lowest possible bake setting: 150 degrees Farenheit. You can also use a double boiler to melt cacao butter but please, don’t use a microwave. Microwaves alter the molecules in your food in unnatural, cancer-causing ways. (If you don't believe me, read this.) 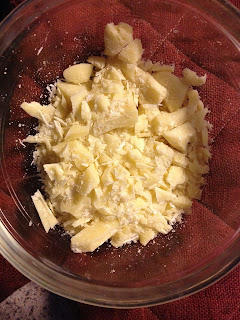 By the way, if you don't have a kitchen scale, just chop up the cacao butter and measure it instead. 3 ounces equals about a half a cup chopped -->

According to my research, the purest fat bombs are made only with 2 main ingredients:

2) a sugar-free, zero-carbohydrate sweetener such as stevia, erythritol or monkfruit.

Some recipes call for Sucralose/Splenda but I wouldn't touch that scariness with a 10-foot pole, let alone my lips. Not to be overdramatic, but really. Just, no.

For the sweetener in this recipe I used Golden Lakanto, a combination of monkfruit and erythritol. Lakanto, available in white or golden, is currently sold online only, as far as I can tell. The golden tastes quite nice—brown sugarish with no nasty aftertaste. It is kind of hard to get, though. If you can't find Lakanto, try organic erythritol, a pure sweet tasting, non-fermenting polyol (sugar alcohol) that's sold at Whole Foods under the somewhat unfortunate brand name "Zero." Zero erythritol is what I put in my tea these days. It's a white crystalline sweetener offering plain, slightly cool sweetness and is 100% SIBO-safe, as well as non-poisonous (e.g. sucralose, aspartame) and a little less pricey than Golden Lakanto. But I digress...

Anyhoo, here's a secret: I’ve been experimenting with making fat bombs for a while—adding whey protein isolate to make them chewy, spicing them up with cinnamon, ginger, vanilla extract and essential oils like lemon, orange and tangerine. But I haven’t shared any of those recipes because, to be honest, so far they haven’t been THAT great.

But...I got a little crazy yesterday and decided to make some über-fancy fat bombs with shredded coconut, pumpkin seeds and sunflower seeds added. BE ADVISED: nuts and seeds are not recommended when you are first starting out on a SIBO-safe diet.

I avoided all nuts and seeds like the plague over the entire summer, i.e. for two or three months while I was on my strict ketogenic healing program, and I’m NOT planning on eating them regularly now. But for a treat, IF you can limit yourself to one or two AND you’re out of the woods with the bloating (very important point), you might like to give these babies a try. They really are pretty darn good! 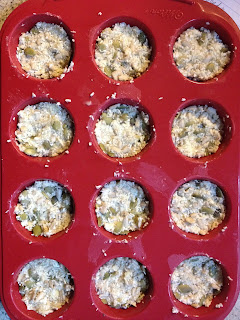 Divide mixture evenly into the 12 cups of a silicone mini muffin cup mold, or if you don’t have one of these (I just got mine at Bed Bath and Beyond—it’s awesome!), turn the mixture onto a sheet of wax paper, shape it into a log and roll it up. Refrigerate or freeze for 20 minutes to harden. If you did the log method, slice into 12 circles, or as desired. The mini muffin mold cups just pop right out!

Variation: Replace the coconut, pumpkin seeds and sunflower seeds with about ½ cup of whey protein isolate or Pure Paleo protein powder, vanilla or chocolate flavor.  This is a good option for people on Phase 1 of SIBO-safe diet. Note: The exact amount you need to add will vary depending on the consistency of your powder. Just start stirring it in one tablespoon at a time until the mixture starts to thicken up enough to divide into the mini muffin cups or roll into a log. Then, chill as above and enjoy. :) 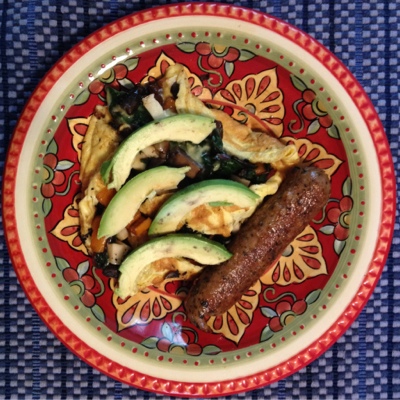 What I really wanted this rainy Saturday morning was a muffin. A whole grainy Morning Glory muffin packed with raisins, walnuts and grated carrots and zucchini. The kind I used to love before I learned that grains were not my friend.

I knew where to get one, too. In fact, I was THIS close to getting in my car, 2nd Street Bakery bound, when...

I got saved. What saved me were two things. 1) The honest knowledge, based on experience, of how crappy I'd feel for the rest of the day (if not longer) if I introduced wheat into my body for breakfast. And 2) the knowledge that I could make myself a delicious, savory breakfast WAY more satisfying and digestible than some dumb old muffin with its sweet secret promises of pain and noisy farts to come.

I had everything in the fridge for a veggie and cheese omelet. I made it, I ate it, I enjoyed it and my belly feels like a million bucks. Full, but functional. Going out for the whole day now and I won't be hungry till dinner. Feel like a champ. Mind over matter rocks.

What's in my bowl:

Avocado garnish. Yum.
Posted by diana allen, ms, cns at 7:09 AM No comments: