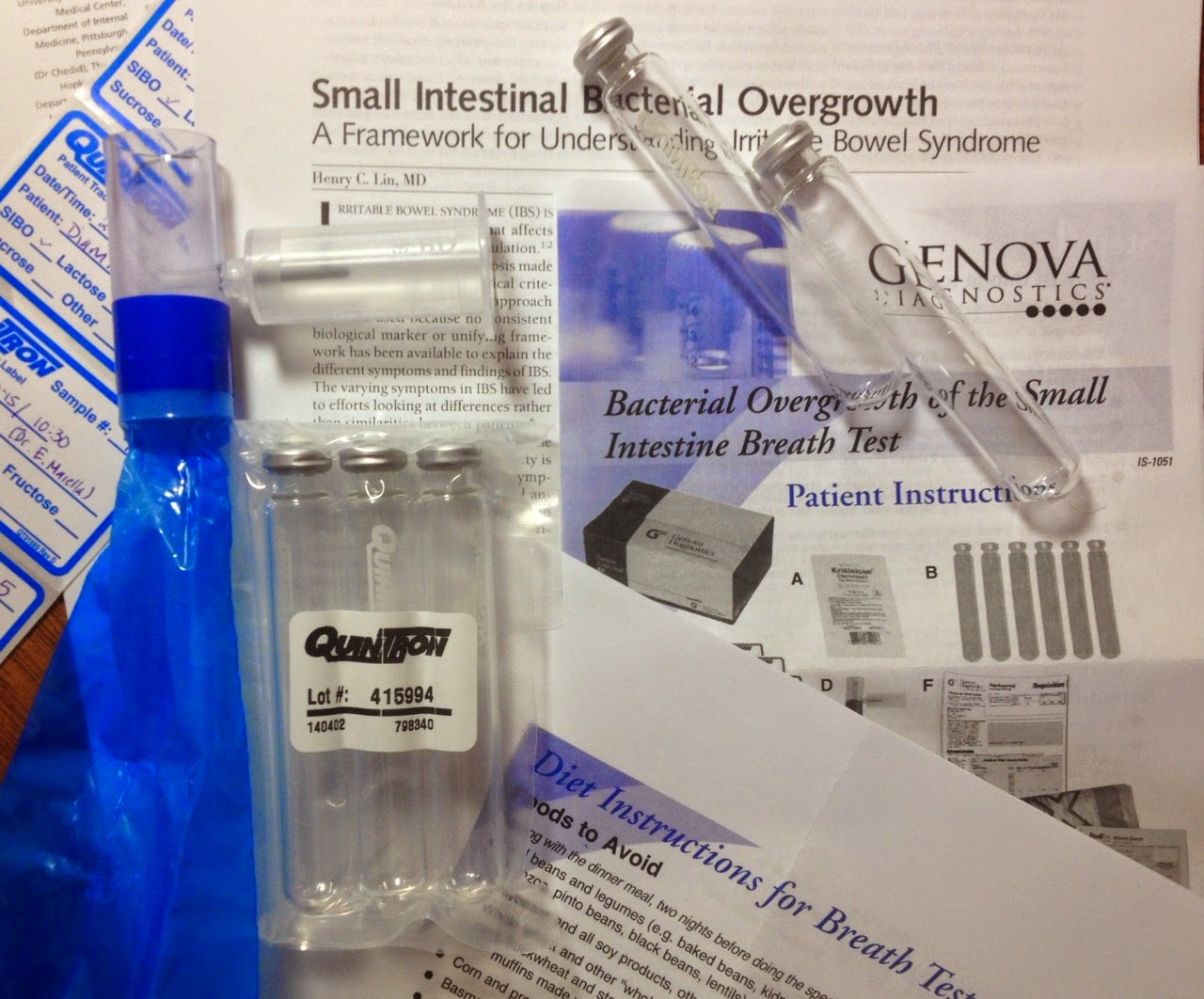 I was on the fence about doing a lactulose breath test.

There were a few reasons for the ambivalence.

First, based on my symptoms, I was pretty sure I had SIBO anyway. The GI doc I'd seen had warned me the test was really expensive ($375 if I did it through her with Commonwealth Labs). She also said she was ready to treat me without testing and even gave me a prescription for Rifaxamin before I left her office.

Considering her opinion, and knowing that one accepted way of diagnosing SIBO is retrospectively—in other words: if symptoms resolve on treatment, you have SIBO—why spend the extra dough on testing?

The second reason for my hesitation was that some controlled studies (comparing the results of people with and without IBS) have cast doubt on the validity of the lactulose breath test itself. There may be a high rate of "false positives" in IBS-free people. This makes some experts think the lactulose test may be more useful for ruling out SIBO (when a negative result is found) rather than for diagnosing it from a positive result. So again, why should I bother?

Third, the test takes 2 or 3 hours to do at home and requires a restrictive prep. Part of the prep is to not take any antibiotics (including herbal), probiotics or laxatives for TWO WEEKS prior to testing. WHAT? Magnesium and herbal laxatives help make my life possible!

And there was the restrictive prep diet: your choice of eggs, chicken, fish, white rice (unless you are grain-free) and white bread (unless you are gluten free) the day before you test. That's it. A little salt and pepper is permitted, but no honey, sugar, dairy, fruit, vegetables, whole grains, etc. Nada. Plus you have to fast on water for the final 12 hours preceding the test.

It was a lot to wrap my mind around, but in the end, I decided to do the test anyway, albeit through a different lab and with a different doctor who only charged me $130 (that's more like it).

Why did I make this decision? Because inquiring minds want to know! I wanted that formal diagnosis. If the test came out positive, it would give me a baseline, too. And there's nothing like a positive test to confirm a diagnosis and help keep the patient on track.

I took the test the second week in February, sent it in to Genova Diagnostics and the results came back on the 17th. Positive. It was official. I have SIBO. 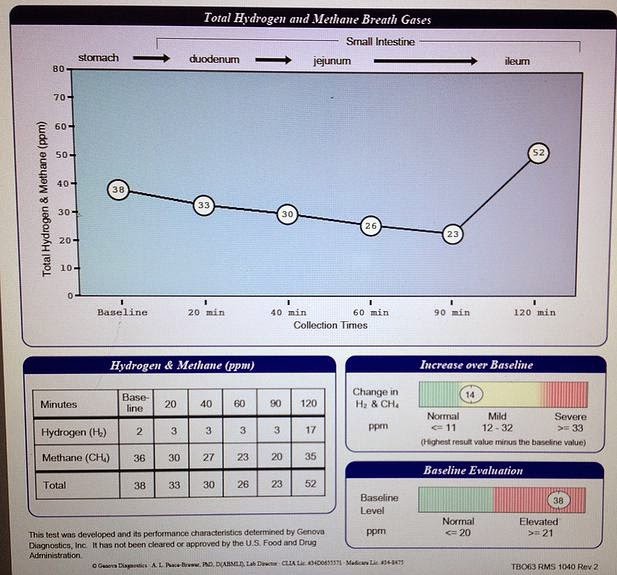 These are my results. The graphs show my baseline breath levels of hydrogen and methane gasses before drinking a lactulose solution, and my production of these gases over the 2-hour post-imbibing period. In the case of a positive test (which this is) the type of gas produced indicates which type of microbe is overpopulating the small intestine.

As suspected, I am a methane producer. IBS-C people usually are. (My proud motto—"My farts don't smell"—was another tipoff, since methane, as I recently learned, is an odorless gas.

As you can see, I started out with high baseline levels of methane. These levels decreased initially, but when the lactulose hit my distal ("far away") ileum, they shot up again. Hydrogen levels shot up at that point, too. This indicates the presence of both methane-producing and hydrogen-producing microbes, although the methanogens are prominent.

At my house, everybody eats.

I found it a bit confusing why at first, my breath gas levels went down but apparently that is not uncommon, according to this excellent article from Allison Siebecker (my hero) and her research partner Steven Sandberg-Lewis, which helped me make sense of the results:

SIBO: The Finer Points of Diagnosis, Test Interpretation, and Treatment

Anyway, considering that I began with elevated baseline levels, the reported "mild increase" of 14 points suggests I have a mild-to-moderate case of SIBO.

It was good to have confirmation. A little weird (bacteria are taking over my body!) but good. I suppose I could feel invaded, but I decided instead to position myself as a wonderful host. The hostess with the mostest, you could say.

Nevertheless, I've had it with these guests. Hence I came up with a plan: Herbal antibiotics, biofilm disruptors, digestive support and motility support (a key component). At this writing, I am, in fact, nearing the end of a 30-day protocol that I will share in forthcoming posts. So stay tuned. And leave a comment below if you're thinking about doing lactulose testing, or have any questions. I'd love to hear from you.